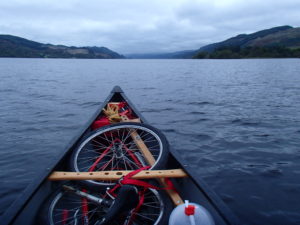 Jonathan Kitching from Birsemohr, Aboyne and former SAPOE representative for Aberdeen City has just completed a marathon canoe journey across Scotland to raise money for cancer charities.  The journey that started in Crinnan near Lochgilphead, was a solo unsupported challenge by canoe and bike.  The road sections that joined together the lochs and rivers were travelled with the bike pulling the canoe on a trolley.  The bike then travelled, in bits, in the canoe on the water.

Jonathan lives with myeloma, a treatable but incurable cancer of the bone marrow. After agreeing with his consultant last March to re-start a six month chemotherapy course and have another stem cell transplant (SCT) around Sept 2020, Covid 19 came onto the scene and new drug treatments were cancelled.  A radiotherapy course was undertaken instead on a myeloma growth in his pelvis and the plan was to see what happened next. 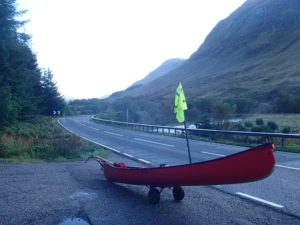 As the cancer counts in his blood reduced he was able to start rebuilding strength and fitness.  In early September he decided to put this to some good and celebrate not heading for another SCT later in the month, by undertaking this challenge across Scotland and raising some money for Aberdeen Maggies, Clan Aberdeen and Myeloma UK.

The route followed the Crinnan canal for 2 miles, then the bike was assembled, the towing boom placed on the canoe then the two fastened together travelled to Ford at the southern end of Loch Awe, a distance of 9 miles.  Up Loch Awe 22 miles, then 18 miles on road (a lot of uphill) towing the canoe to Tyndrum then Crianlaraich. Here the bike could be left at a friendly inn and the journey continues down the river Dochart to Killin, 13 miles.  Then Loch Tayfor 15 miles, and eventually down the river Tay to Newburgh on Tay  – a further 55 miles.  A journey of 135 miles (216 km) in six days. 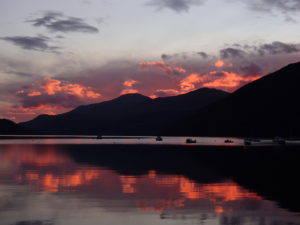 “ I might have been on my own, a type of self isolation if you like, but we all know such things are not achieved without the support of family, friends, the Haematology clinic at the ARI, people in general and a fair wind on your back.  So a big thankyou to all of them” JK 28.09.2020

Thank you to all who have contributed to date. If you would like to contribute to the funds raised by this challenge you can find it at: https://uk.virginmoneygiving.com/jonathankitching

This site uses Akismet to reduce spam. Learn how your comment data is processed.

‘Going Out There’ is the Scottish framework for Safe Practice in Off-site Visits. It has been developed in partnership by the Scottish Government, the Scottish Advisory Panel for Outdoor Education, the Health and Safety Executive, Education Scotland and the Association of Directors of Education, with input from other partners, voluntary organisations and providers.